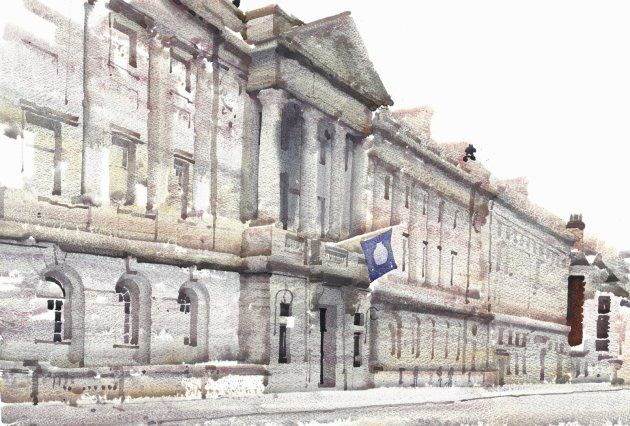 In September of 2014 I was honoured with a solo exhibition at the Royal Automobile Club in Pall Mall. The theme of the club itself was used for the collection of watercolours. I painted in and around the club between December 2013 and April 2014. The resulting show was one of the most popular art exhibitions held at the club.

The club building in Pall Mall is striking. I painted a number of views one of which was reproduced as a limited edition print especially for the club. The club dominates a significant stretch of Pall Mall on the same side as St James's. It has gas lanterns outside it and large lanterns that were once lit along the top of its façade, which must have looked dramatic in the days of gas street lighting.

The image of the club library is perhaps a cliché, however with the addition of the ladder this made a really terrific subject. The furniture also helped provide interest. This room was at the front of the club so when I painted it had a little natural light through the windows and had reflected light from the huge building mostly glass from across the street so in that sense was one of the lighter rooms within the club. The library was very quiet away form the many high profile events that go on at the club the librarian himself said they prefer to be away from all the action as seen for example in the entrance hall. 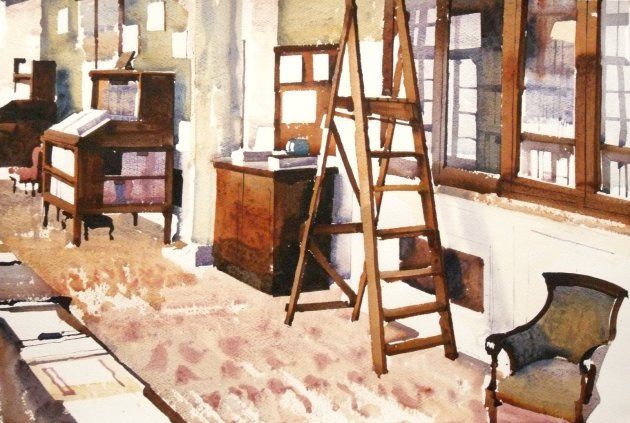 Because of the nature of the Club, most of the interesting aspects were on the interior. The club comprises of a swimming pool, a large club room that traverses the whole building, restaurants and an atrium, an oval central space, where cars were bought in for display and various lobbies, balconies and grand reception rooms. There were views down from the gallery on to the atrium displaying the cars that were frequently changed. Other unique subject included the traditional library and the entrance hall with an impressive revolving door large enough when opened up to allow the cars to pass through for display.

The Cars in the Atrium

A real source of inspiration for me was to see the changing cars on display in the atrium of the club. Every so often the large revolving doors of the club entrance would be taken off and by means of a special ramp cars would be brought in and displayed. I found stunning view on these displays from the gallery above. The cars were from all eras some old, some modern, some iconic such as 911's or Talbot Sunbeam winner of a rally in the 1980's.

The views I found of the cars were fascinating – I had never painted a car in this setting before and the different forms with the reflections ware a real novelty for me. Curiously, when I painted them, I found the older cars, designed by hand on paper, were different to paint than the newer computer designed cars. For example the older ones seemed to have a distinction in the form of glass and metal where as the newer ones did not they had a unified shape as if it had melted from one material.

I found cars a terrific subject and the setting created a really unique series of pictures. By painting from the gallery above I managed to get some distance from the subject and as a good consequence of this the extreme perspective gave some drama to the scene. 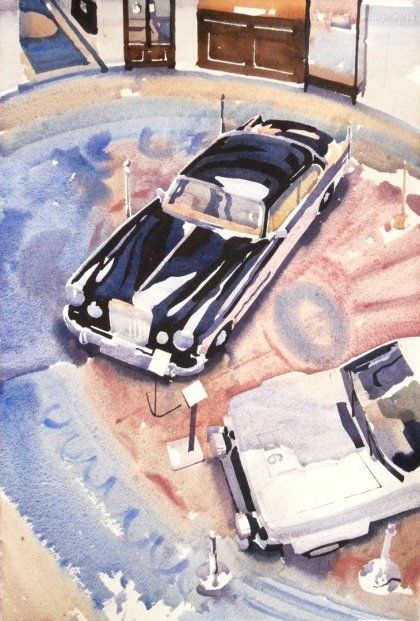 The entrance hall was at times a buzz of activity while at other times very quiet. I had passed the subject a number of times –I knew it had potential but it was only when I found a good position to stand and work that I figured out the composition. I found the architecture very interesting and the door was a real novelty. To the right of the door is the porters desk. The Porters have to attend to the many needs of visitors and members of the club and so always have to be on hand – and sometimes, as in this painting, waiting. 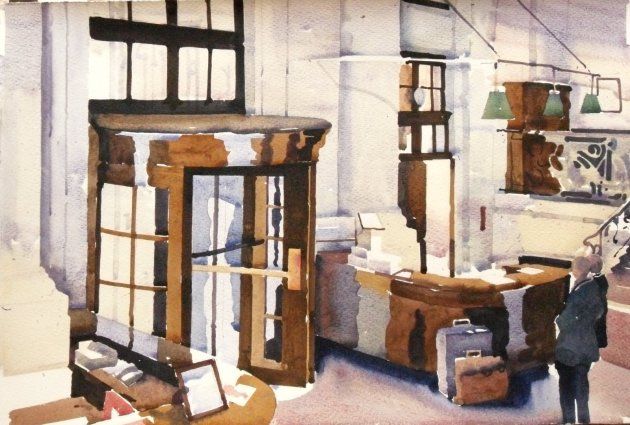