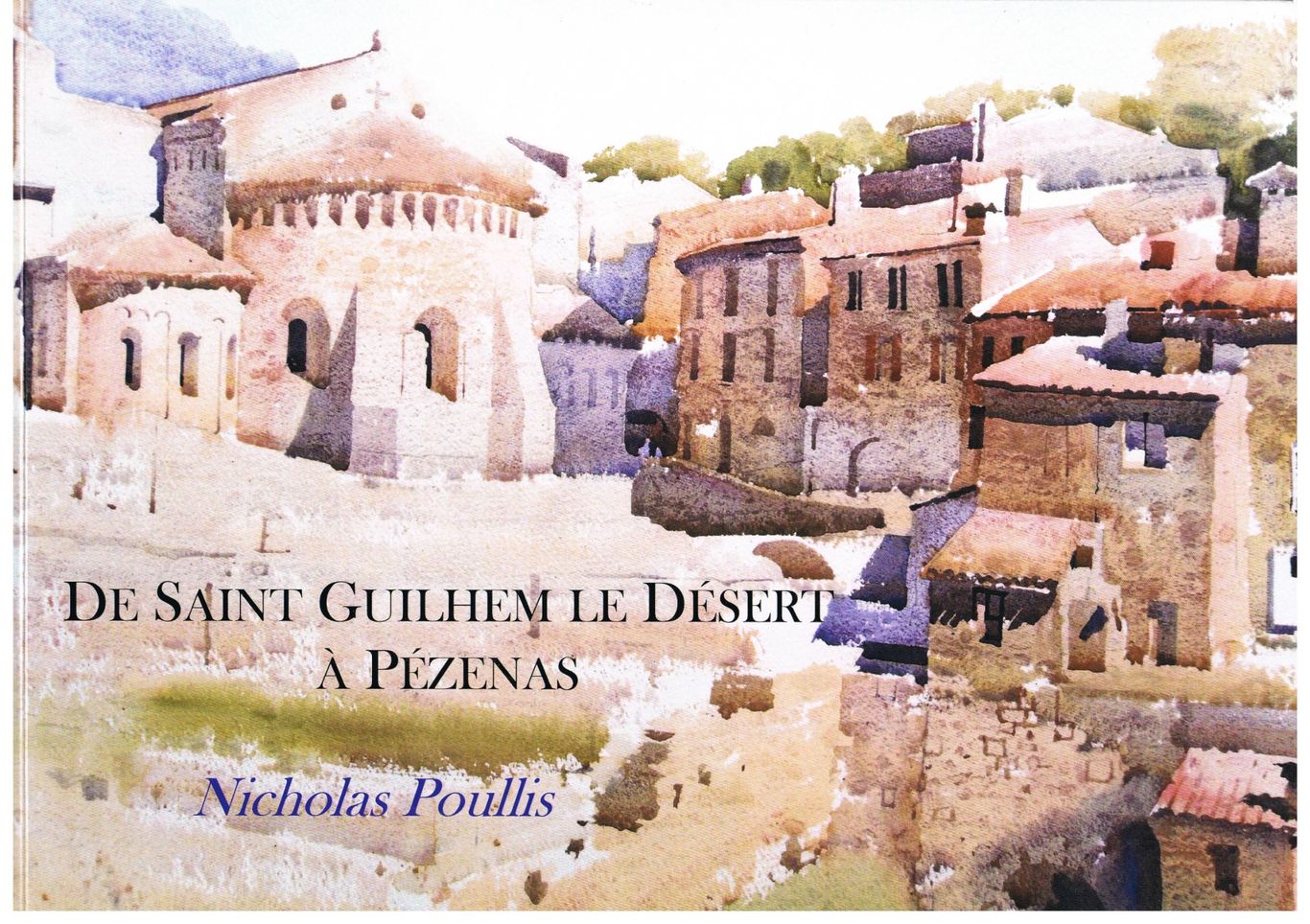 The new and expanded 2nd edition of this popular book is available directly from the artist.

The book is priced at £30 and can be posted to you, please contact Nicholas for a quote including postage. Payment can be made through paypal.

Whenever I have travelled through France I have always been struck by the beauty and atmosphere of the south; it seems so different from the rest of the country. The Languedoc has a strong identity that is closely linked to the culture of the Mediterranean. Often through trade, there has always been contact with eastern Mediterranean cultures. Some ports such as Agde and Sète were founded by Greek traders who introduced vines. Wine production has been associated with the Languedoc since the fifth century BC and it is the single biggest wine producing region in the world. There is also an artistic heritage associated with the south of France and the strong light and vivid colours inspired the Fauve movement in Collioure.

The Languedoc possesses some of the finest and best preserved examples of medieval architecture, the historic centre of Pezenas is a good example of this and the ancient Commanderie of the Knights Templar springs to mind. Other monumental pieces of architecture found in the region include the Cathedral and bridge built by the Cathars at Beziers and Abbaye de Valmagne. There are also numerous examples of modest historic architecture fundamental to the atmosphere that features largely in the paintings. As well as the more obvious examples of well preserved architecture, the region also posses what I would call 'working history' in the form of its mills such as the truly ancient Mill at Bessan and St Thibery, said to have been built using a Roman bridge just next to it as a quarry.

One of the very attractive aspects of architectural subject matter for the artist is the varied textures created by the stone used in construction. Obviously this varies and in Agde the town is built of very dark volcanic rock that seems to absorb light.

An important part of the culture of southern France and Spain is expressed in the activities surrounding the bull. In 2004 I started to produce paintings on the subject of the Abrivado, the release and capture of bulls in town streets. This part of the Abrivado developed from the fiasco of getting the animals to the arena. This was an opportunity to paint bulls, horses and man interacting. Movement became an important theme of each painting some of these paintings feature in this book. Another subject that has fascinated me for a while is the Cyclists of the Tour de France that have passed through the region a number of times in recent years.

The books journey starts in Saint Guilhem le Desert one of the Plus Beaux Villages de France and site of the Abbey of Gellone a UNESCO World Heritages site.

The route then meanders towards the coast through Villeneuvette, Clement L'Herault where I painted the fortress, then on towards Sete which I painted from Mont St Claire, then on to the port of Marseillan and then Agde. Then there is a jump down to Collioure before rejoining the route with visits to Abbey Valmagne, Saint Thibery its Mill and the numerous sites of interest found near Pezenas such as the little known Moulin at Roquemenguarde, Chateau Lavagnac and Cassan. Roughly in the middle there is a diversion to the Canal du Midi, Beziers and the Moulin Cordier.

The route then takes us through various subjects before finally arriving at Pezenas sometimes referred to the 'jewel of the Languedoc' that has become symbolic of the region. This town deserves special attention and so these paintings feature probably a wider range of subject reflecting the varied activities offered and also reflect a deeper connection I have with the town. There is also a major part devoted to the special architecture of Pezenas and its different perspectives.

This A4 sized book features over one hundred and twenty five paintings in full colour. 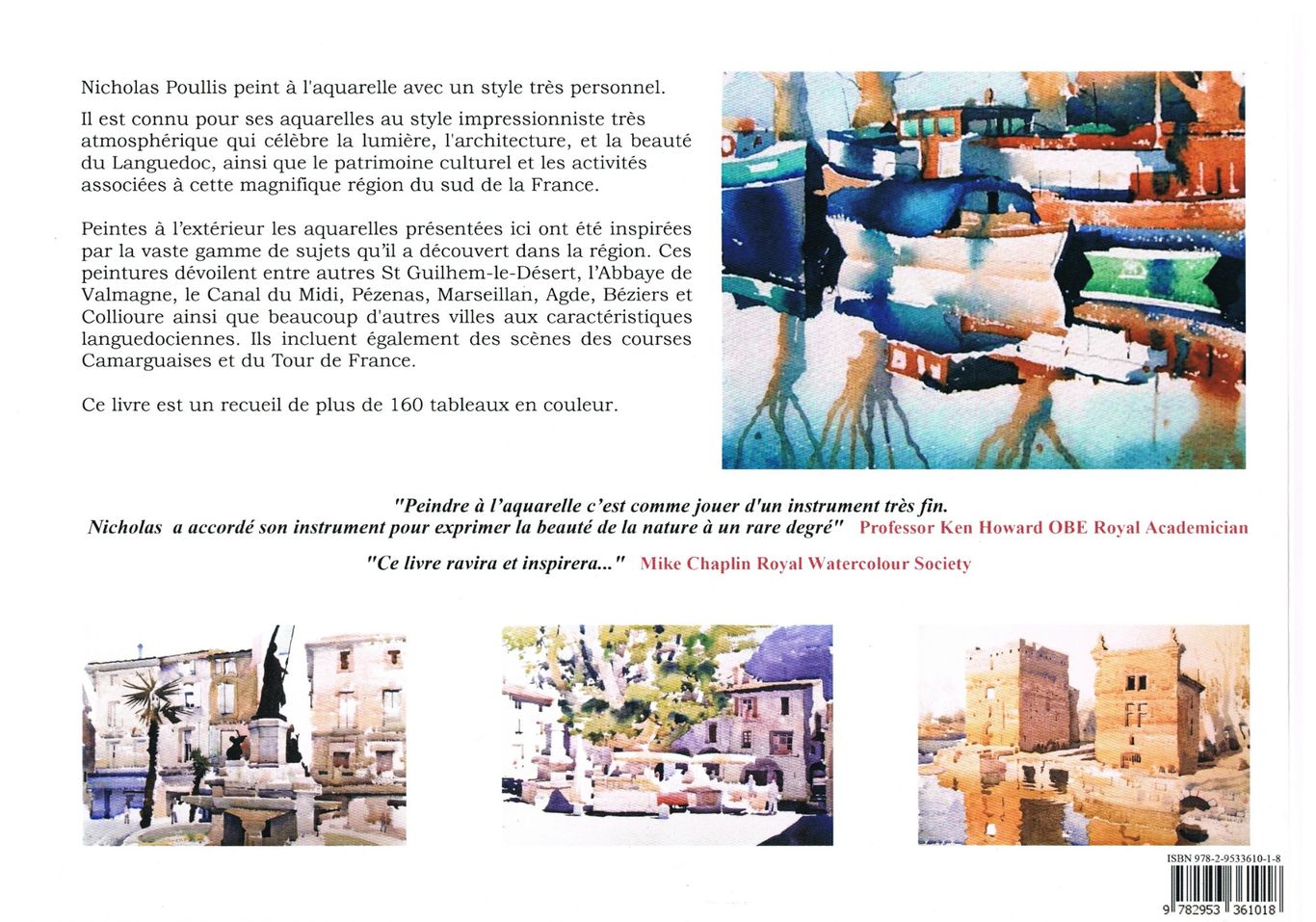